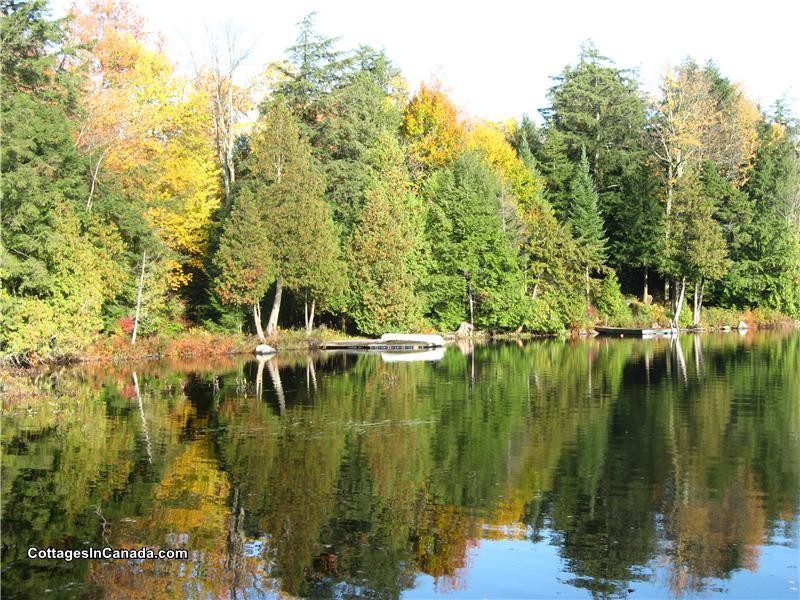 Dad and I had our differences, but we also had a lot in common. For example, we shared a love for challenging projects. Dad was an avid fisherman. Doesn’t every fly fisherman tie his own flies? I would have thought so as I watched him create delicate fly lures in a vise with pliers and tweezers. In retirement, Dad immersed himself in woodworking—starting with inlaid treasure chests and moving on to gorgeous furniture. He made a roll top desk and a beautiful cherry corner cabinet. It was the precision in each fine detail that gave him the greatest satisfaction.

Dad took on at least three writing projects in his retirement. (Writing came easily after his career as a scientist in which publishing was expected.) First, he compiled a set of albums with photographs for Mom. It covered their 50+ years together. He lined 5×8 index cards vertically in pencil and hand wrote each page. The second writing project tells the story of his family’s summer cottage on Danford Lake near   Kazabazua, Quebec, less than two hours from their home in Ottawa. Dad applied the same level of detail to writing as he did to woodworking. What a wonderful memoir for the entire family.

I loved it so that I asked Dad to write about our cottage–Curran’s Lake. In April 1998, I typed his manuscript. Dad was in his 80s and Mom was not feeling well. I believe he had more to say but the opportunity slipped away. I am also sure he would have included photos. Here is a link to the first eleven pages—an unfinished memoir of our cottage. Curran’s Lake

Having spent his summers at Danford Lake, Dad was keen on finding a cottage for us. Eventually, he and Mom saw an ad in the Montreal Star for a lakefront property.  They checked it out and loved it.  From 1952-1962, we drove up to Curran’s Lake as soon as school let out and returned to Ste-Anne-de-Bellevue on Labor Day. Dad had to work Monday through Friday. He came to the cottage every Friday evening for the weekend. I was just 3 years old during our first summer. When I was 13, my parents had to sell the cottage because we were moving south to Amherst, Massachusetts! But for those childhood years, summer meant going to the cottage on Curran’s Lake.

The drive to the cottage was not at all boring. We crossed the Ottawa River by car ferry and soon hit gravel roads. Our laneway was so overgrown, the trees surrounded the car. Excitement grew as we slowly made our way downhill, eagerly awaiting the first glimpse of the bright red roof of our cottage. And then we started pleading to go swimming. Planning and packing always included indoor games and library books, but all we really wanted to do was play outside and go swimming.

For the first couple of years, Dad installed chicken netting around the shallow water, fencing us in. Safety first! However, it didn’t take long for the fence to be removed.  I have no doubt, we would have all agreed, Dad’s best cottage project was a white raft he built by himself. The wooden top rested on four steel drums and an anchor held it in place. He painted the steel ladder silver. It was a masterpiece and we loved it! But, cottage life still had rules and routines—we swam an hour mid-morning and an hour in mid-afternoon. We were not allowed in the water until an adult was seated on shore, only a few feet from the water. In ten years, we never had a swimming mishap.

My parents owned two more cottages. In Johnson, Vermont, they built a cabin on the Lamoille River, perfect for fly fishing in chest waders! And then, north of Kingston, Ontario, they purchased a furnished cottage. It was their first cottage on a lake that allowed motorboats, perfect for a small pontoon boat. Paul and I loved it!

I also want to wish a Happy Father’s Day to my husband, my son, and my son-in-law! Wonderful dads!

So many wonderful memories! And so much carryon on…your Dad was a great writer and so are you!!!!

Love and pride in all you do!
Linda

Dear Linda, I’m happy you read Dad’s piece on Curran’s Lake. It really is a treasure with so much information.

What a terrific memory you have to be able to recall so many details of your early life. I loved your pictures as well

Thank you, Joan! Thanks for reading.

[…] It’s summer and memories from my childhood continue to scramble to the surface of my mind. We are at our cottage on Curran’s Lake in Quebec, Canada. Dad came up on the weekends and that meant my brother, sister, and I would be required to work outside with him, often gathering brush. https://younglove-anadopteesmemoir.com/2019/07/24/a-surprise-bonfire/ https://younglove-anadopteesmemoir.com/2019/06/11/sunday-is-fathers-day/ […]